We, humans are very perfect in applying the transfer of knowledge between tasks. This means that whenever we encounter a new problem or a task, we recognize it and apply our relevant knowledge from our previous learning experience. This makes our work easy and fast to finish.

For instance, if you know how to ride a bicycle and if you are asked to ride a motorbike which you have never done before. In such a case, our experience with a bicycle will come into play and handle tasks like balancing bike, steering, etc. This will make things easier compared to a complete beginner. Such leanings are very useful in real life as it makes us more perfect and allows us to earn more experience.

Following the same approach, a term was introduced Transfer Learning in the field of machine learning. This approach involves the use of knowledge that was learned in some task, and apply it to solve the problem in the related target task. While most machine learning is designed to address a single task, the development of algorithms that facilitate transfer learning is a topic of ongoing interest in the machine-learning community.

Why transfer learning?
Many deep neural networks trained on images have a curious phenomenon in common: in early layers of the network, a deep learning model tries to learn a low level of features, like detecting edges, colours, variations of intensities, etc. Such kind of features appears not to be specific to a particular dataset or a task because of no matter what type of image we are processing either for detecting a lion or cars. In both cases, we have to detect these low-level features. All these features occur regardless of the exact cost function or image dataset. Thus learning these features in one task of detecting lion can be used in other tasks like detecting humans. This is what transfer learning is. Nowadays, it is very hard to see people training whole convolutional neural network from scratch, and it is common to use a pre-trained model trained on a variety of images in a similar task, e.g models trained on ImageNet (1.2 million images with 1000 categories), and use features from them to solve a new task. 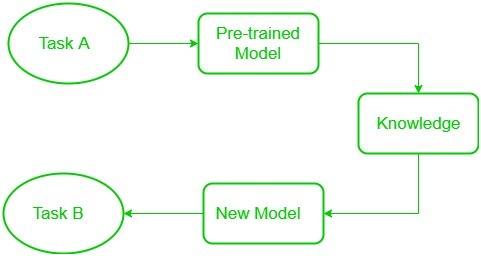 When dealing with transfer learning, we come across a phenomenon called freezing of layers. A layer, it can be a CNN layer, hidden layer, a block of layers, or any subset of a set of all layers, is said to be fixed when it is no longer available to train. Hence, the weights of freezed layers will not be updated during training. While layers that are not freezed follows regular training procedure. 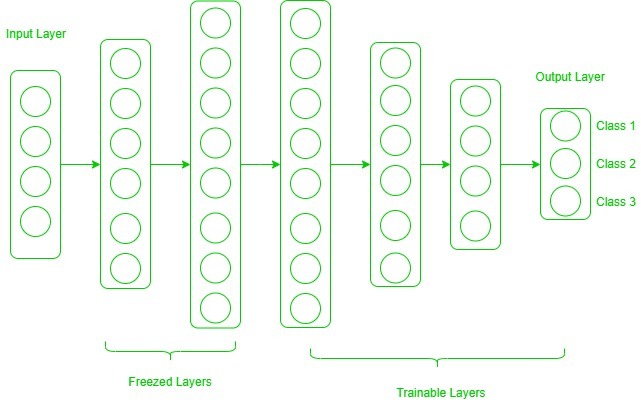 Now, one may ask how to determine which layers we need to freeze and which layers need to train. The answer is simple, more you want to inherit features from a pre-trained model, more you have to freeze layers. For instance, if the pre-trained model detects some flower species and we need to detect some new species. In such a case, a new dataset with new species contains a lot of features similar to the pre-trained model. Thus, we freeze less number of layers so that we can use most of its knowledge in a new model. Now, consider another case, if there is a pre-trained model which detects humans in images, and we want to use that knowledge to detect cars, in such a case where dataset is entirely different, it is not good to freeze lots of layers because freezing large number of layers will not only give low level features, but also give high level features like nose, eyes, etc which are useless for new dataset (car detection). Thus, we only copy low-level features from the base network and train the entire network on a new dataset.

Lets consider all situations where size and dataset of the target task vary from the base network.

Learning means the acquisition of knowledge or skills through study or experience. Based on this, we can define machine learning (ML) as follows: It may be defined as the field of computer science, more specifically an application of artificial intelligence, which provides computer systems the ability to learn with data and improve from experience without being explicitly programmed. Basically, the main focus of machine learning is to allow the computers learn automatically without human intervention. Machine learning is a subfield of artificial intelligence, which is broadly defined as the capability of a machine to imitate intelligent human behavior. Artificial intelligence systems are used to perform complex tasks in a way that is similar to how humans solve problems.
27-jan-2021 /10 /150

Sequence Modeling is the task of predicting what word/letter comes next. Unlike the FNN and CNN, in sequence modeling, the current output is dependent on the previous input and the length of the input is not fixed. In this section, we will discuss some of the practical applications of sequence modeling.
3-jan-2022 /10 /150

DESCRIPTIVE STATISTICS : Descriptive Statistics is a statistics or a measure that describes the data. INFERENTIAL STATISTICS : Using a random sample of data taken from a population to describe and make inferences about the population is called Inferential Statistics.
3-jan-2022 /10 /150
﻿