How to Use Routing with React Navigation in React Native ?. The Complete React Native Developer Course 2022 [Videos].

Approach: We will be using the StackNavigator provided by React Navigation. It is used to allow transitions between screens wherein every new screen is placed on top of a stack. In our example, we will be creating 3 screens and transitioning between them using the StackNavigator. We will also learn how to pass data from one screen to another and display it in the screen header along with basic transitioning.

Project Structure: The project directory should look like the following: 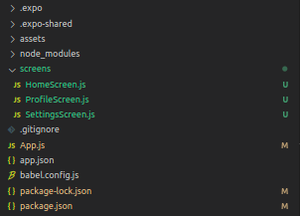 This file contains the basic Navigator setup. We will use the createStackNavigator() method provided by the react-navigation-stack library to create our stack navigator. Some basic styles are provided to all the 3 screens using the default navigation options.

This is the first screen of our stack. In this screen, we will ask the user to provide a profile name as an input which we will pass to the “Profile” screen.

This screen will receive the input given by the user in the Home Screen using the navData object and display it in its header.

This is a simple screen with a button to go back to the Home Screen.

Step to run the application: Start the server by using the following command.

Setting up the development environment of React Native.

If you are new to mobile development, the easiest way to get started is with Expo CLI. Expo is a set of tools built around React Native
8-Sep-2021 /1 /158

How React Native is different from ReactJS ?

ReactJS: It is a JavaScript library that supports both front-end and server-side. It is a popularly used library, which focuses on developing user interfaces (UI) for mobile as well as web-based applications. Developed by Facebook, it is based on the JavaScript language and hence, it is synonymously also called ReactJS.
19-jan-2022 /1 /158

How to Use Routing with React Navigation in React Native ?