Web3, or Web 3.0, is the next generation of the Web. Tim Barners-Lee called it the Semantic Web. Co-founder of Ethereum, Gavin Wood, who believes decentralized technologies will be the next generation of the Web, coined the term Web3 in 2014. And recently, Elon Musk asked on Twitter if anyone has seen web3. Twitter founder Jack Dorsey replied, "Its somewhere between a and z."

All jokes aside, you call it Web3 or the next generation of Web, its almost here. In this Video, we will see what Web3 all is about and what technologies make up Web 3 or Web 3.0. But before that, we must understand what Web 1.0 and Web 2.0 are. 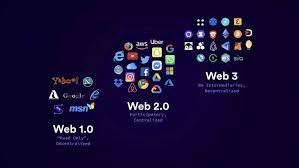 The World Wide Web (W3 or WWW) also known as the Web, is a network of connected computer systems that is connected via the Hypertext Transfer Protocol (HTTP) protocol and uses URLs (Uniform Resource Locators) to access and transfer digital content via Web browsers. The content (web pages, files, images, videos, and other documents) is hosted as a software application called a Web application that is hosted and run on a Web Server.

The World Wide Web was created in 1989 by English scientist Tim Berners-Lee and his co-inventor Robert Cailliau. Tim wrote the first web browser in 1990 at CERN near Geneva, Switzerland where he was working as a contractor and was released publicly in 1991.

Web 1.0 was the first generation of the Web that mostly was filled and linked with static web pages where information was published in HTML pages and most of the content was typed and published on the Web servers and users used it to publish and share information with others. The content of the web pages was embedded directly into html pages and the user experiences were not dynamic and responsive. During this era, the Internet was mostly accessed from desktop computers.

Web 2.0 also known as dynamic web, can be thought as a dynamic web where more businesses moved to the Internet. The data became more dynamic, and evolution and use of backend databases started. The concept of centralized servers evolved and eventually cloud computing took over and is still going on today. Right now were in a cloud era where almost every business is migrating their data and applications to public, private, and hybrid clouds.

Web 2.0 also introduced many modern and powerful Web technologies such as HTML 5, JavaScript, and CSS that made the Web run on any device, anywhere, and any size. Front end technologies such as Angular, React, and several hybrid and native mobile platforms are also a part of the Web 2.0 evolution.

Web 2.0, also known asthe  Social Web, made the Internet more social and interactive where users can use apps like Facebook, Instagram, and Twitter to not only consume information but also connect and communicate with other people in the world.

Web 2.0 is the era of video streaming, interactive images and photos, and dynamic video content that is served based on users interests and preferences. YouTube, Netflix, and many other video streaming platforms are consumed by almost 4 billion people in the world.

Web 2.0 is still evolving with front end technologies like WebAssembly, ReactNative and several others are still being developed.

Web3 term was coined by Ethereum co-founder Gavin Wood in 2014 and the key concept of Web3 is use of decentralized blockchain based system to store users data on blockchain and give them control of their data. But if you ask me, Web 3.0 is going to be much more than just blockchain.

While Web 2.0 continues to thrive, the next era of Web, i.e., Web 3.0 is knocking doors and it has its own reasons.

Web 2.0 is the golden era of the Web, but it also has introduced many challenges and difficulties. Lets look at some of these challenges,

Here are some of the key features of Web 3.0 described by some pundits,

Sematic web is a key feature of Web 3.0 which Sir Berners-Lee described in a May 2001 Scientific American Video "The Semantic Web" (Berners-Lee et al.), that says "The Semantic Web is an extension of the current web in which information is given well-defined meaning, better enabling computers and people to work in cooperation." Here is a drawing that adds more meaning to the semantic web.

In the Web 2.0 era, the data is stored everywhere and there are many systems being developed to make sense from the data. In the Web3 concept, the data will be stored in the form of information (meaningful data) that will make it easy to understand and collaborate by both, people, and computers.

Ubiquity or omnipresence means being anywhere and everywhere. In the Web3 concept, the systems are expected to be available everywhere and anywhere. This is an extension of current software systems being developed with the help of technologies such as decentralization, edge computing, offline availability, and other technologies.

AI and Machine Learning is another key feature of Web3 which is the natural profession of current systems where automation with the help of AI and ML is growing.

Decentralized Networks based on blockchain technology are growing tremendously. Decentralized and distributed systems do not reply on a centralized authority and storages. The network runs on a peer-to-peer protocol and managed by operator nodes that can run from anywhere in the world.

Moving from 2-D world to 3-D world is the natural extension of current content and graphics. Latest updates of Web browsers and software development technologies allows Spatial Web and 3D Graphics to be integrated in new systems. 3D graphics and Spatial Web is another pillar of Web3.

My Views on Web3

While some people claims that decentralized computing will rule Web3, Ive a slightly different opinion on this. In my view, Web3 is a much bigger evolution of Web 2.0 that will try to solve the major challenges I discussed earlier including big data, data privacy and ownership, centralized control, and missing trust and transparency with governments.

Here are some of the technologies that will be an integral part of the future version of Web if thats called Web 3.0.

Some experts are predicting that the Metaverse is going to be one of the fastest growing areas of Web 3.0. Metaverse is a combination of augmented reality (AR), virtual reality (VR), and mixed reality (MR) and blockchain (digital currency and digital assets).

To learn more about metaverse, here is a detailed Video,

Web 3 or Web 3.0 is the idea of the next generation of the Web where most of the people will be connected on a decentralized network and people will also have control of their own data. In this Video, we learned about technologies that are expected to grow and evolve in coming years. Web 3.0 is going to introduce several new technologies including intelligent systems, semantic web, decentralization, metaverse, digital assets, and more. Time will tell which of these technologies will rule the Web in coming time but Web 3.0 is almost here and its coming big. One thing is for sure. With all this innovation and development, security (data, web, and everything else) is going to be a major problem. That means, there is going to be a hug need of security experts and securty related systems.

How to start with Machine Learning .NET (ML.NET)?

Web3, or Web 3.0, is the next generation of the Web. Tim Barners-Lee called it the Semantic Web. Co-founder of Ethereum, Gavin Wood, who believes decentralized technologies will be the next generation of the Web, coined the term Web3 in 2014. And recently, Elon Musk asked on Twitter if anyone has seen web3. Twitter founder Jack Dorsey replied, "Its somewhere between a and z."
7-Feb-2022 /25 /333