What is Angular Services?. The Complete Angular Developer Course 2022 [Videos].

What are Angular Services?

The Angular Services are the piece of code or logic that are used to perform some specific task. A service can contain a value or function or combination of both. The Services in angular are injected into the application using the dependency injection mechanism.

Why do we need a service in Angular?

There is a principle in software development i.e. DRY (Dont Repeat Yourself) and using services in angular safely follow this principle. The logic or data is implemented in a services and the service can be used across multiple components of your angular application. So, services is a mechanism used to share the functionality between the components.

Without Angular Services, you would have to repeat the same logic or code in multiple components wherever you want this code or logic. Now think about the overhead in terms of time and effort required to develop, debug, test and maintain the duplicated code across multiple places instead of having that duplicated code at one central place like a service and reusing that service where required.

Understanding Angular Service with an example:

Let say you want to create an angular service for fetching the student details and this student details is going to be used by many components. So, open terminal and type ng generate service Student and press enter as shown below.

Once you press the enter button it will create two files within the app folder as shown below.

Open student.service.ts file and then copy and paste the following code in it. At the moment we have hard-coded the student data, later in this Video series we will discuss how to get this data from restful APIs. Here, you need to focus on two things. The @Injectable decorator and the getStudents method which returns the student data. As with all other angular decorators, we preceded the name with an @ symbol, and we do not add a semicolon (;) at the end.

Step2: Using the Service in Angular 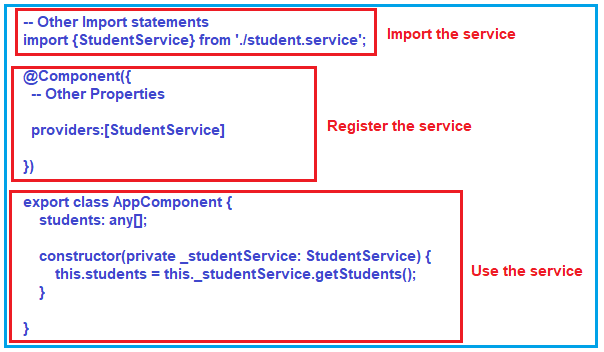 Here, we want to use the Student Service within our AppComponent class.

Open app.component.ts file and then copy and paste the following code in it.

As you can see in the above code, we declare one variable called students and then initialize this variable using the student service.

Now, open app.component.html file and then copy and paste the following code in it.

With the above changes in place, now browse the application and you should see the student data as expected in the browser as shown in the below image.

With the above changes, you will also get the same output.

Difference between constructor and ngOnInit

The ngOnInit is a life cycle hook method provided by Angular which is called after the constructor and is generally used to perform tasks related to Angular bindings. For example, ngOnInit is the right place to call a service method to fetch data from a remote server. We can also do the same using a class constructor, but the general rule of thumb is, tasks that are time consuming should use ngOnInit instead of the constructor. As fetching data from a remote server is time consuming, the better place for calling the service method is ngOnInit.

In our example, the dependency injection is done using the class constructor and the actual service method call is issued from ngOnInit life cycle hook as shown below.

In the next Video, I am going to discuss Dependency Injection in Angular. Here, in this Video, I try to explain the Angular Services with an example and I hope now you understand what are angular services and why do we need them in angular application.

Angular is an open-source front-end development platform developed by Google that makes it easy to build Mobile and Desktop web applications. Angular now comes with the latest features such as templates, dependency injection, Forms, Pipes, HTTP Service, component, Directives, etc. which are basically needed to build a complex and sophisticated application that lives on the web, mobile, or the desktop.
7-Feb-2022 /35 /572

In this article, I am going to give a brief introduction to Angular Framework. At the end of this article, you will understand the following pointers in detail.
7-Feb-2022 /35 /572

In this article, I am going to discuss Angular Versions and Versioning in detail. Please read our previous article where we gave a brief introduction to the angular framework. At the end of this article, you will understand the different angular versions and in each version what are the new features introduced as well as what improves. Till now Google has released 7 versions of angular, they are as follows:
7-Feb-2022 /35 /572
﻿