What is Dependency Injection in Angular Application?. The Complete Angular Developer Course 2022 [Videos].

In software engineering, dependency injection is a technique whereby one object supplies the dependencies of another object. In other words, we can say that, it is a coding pattern in which classes receives their dependencies from external sources rather than creating them itself.

Dependency: Dependency is an object or service that is going to be used by another object.

Injections: It is a process of passing the dependency object to the dependent object. It creates a new instance of the class along with its require dependencies.

Understanding Dependency Injection in Angular with an Example:

Let us understand dependency injection in Angular with an example. First create a service with the name StudentService and then copy and paste the following code in it. In our previous Video we discussed how to create and use angular services.

Open app.component.ts file and then copy and paste the following code in it.

Open app.component.html file and then copy and paste the following code in it.

Now run the application and you should see the output as expected.

Now let us proceed and try to understand dependency injection with this example. Please have a look at the following piece of code of AppComponent class. 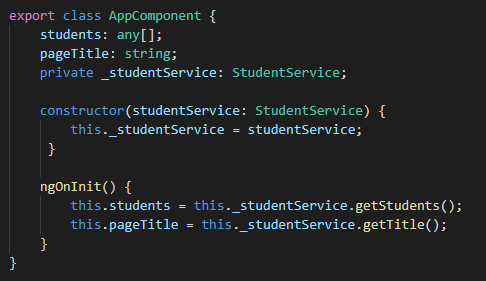 Here, in the AppComponent class, we need an instance of StudentService to call the the getStudents() and getTitle() method of Student Service to get the list of students and the title of the page which is required by App component.

Then we are using this private field _studentService to call the Student Service methods getStudents() and getTitle().

Now, the question that should comes to your mind is, how are we getting an instance of the StudentService class.

How are we getting an instance of the StudentService class?

Who is creating and providing the instance to the constructor?

How does the angular injector knows about StudentService?

For the Angular injector to be able to create and provide an instance of StudentService , first we need to register the StudentService with the Angular Injector. We register a service with the angular injector by using the providers property of @Component decorator or @NgModule decorator. We alwatchy know we decorate an angular component with @Component decorator and an angular module with @NgModule decorator.

On the other hand if you register the service using the providers property of the @NgModule decorator then you are registering the service with an angular injector at the module level which is the root injector. The service registered with the root injector is then available to all the component across the entire application. The syntax to register at app level is given below. As you can see, you need to declare the service within the Providers array of your root module i.e. AppModule. 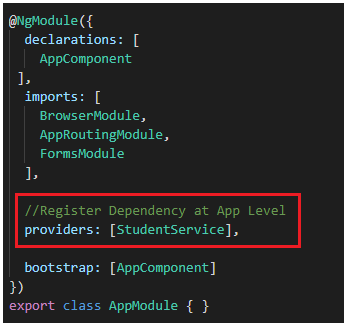 Angular is an open-source front-end development platform developed by Google that makes it easy to build Mobile and Desktop web applications. Angular now comes with the latest features such as templates, dependency injection, Forms, Pipes, HTTP Service, component, Directives, etc. which are basically needed to build a complex and sophisticated application that lives on the web, mobile, or the desktop.
7-Feb-2022 /35 /573

In this article, I am going to give a brief introduction to Angular Framework. At the end of this article, you will understand the following pointers in detail.
7-Feb-2022 /35 /573

In this article, I am going to discuss Angular Versions and Versioning in detail. Please read our previous article where we gave a brief introduction to the angular framework. At the end of this article, you will understand the different angular versions and in each version what are the new features introduced as well as what improves. Till now Google has released 7 versions of angular, they are as follows:
7-Feb-2022 /35 /573
﻿