Why should we use dependency injection in Angular?. The Complete Angular Developer Course 2022 [Videos].

Why should we use Dependency Injection in Angular Application?

Let us understand why do we need dependency injection in angular with an example.

The following are our Computer and Processor classes. As you can see, at the moment, we are not using dependency injection mechanism to inject the dependency object. To build a Computer we need a Processor object and here the Computer class is now creating an instance of the Processor class. You may aware of this type of programming style as it is easy to understand.

Problems with the above code:

But there are 3 fundamental problems with the above code

Why this code is difficult to maintain?

How to overcome the above problem?

The reason we have this problem is because the Computer class itself is creating the instance of the Processor class. Instead if an external source can create the processor instance and provide it to the computer class, then this problem can be very easily solved and thats exactly what dependency injection does. I have rewritten the above code using dependency injection, DI for short as shown below. 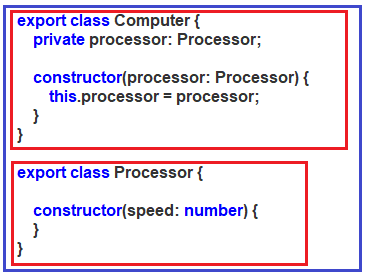 Instances of dependencies created by a class that needs those dependencies are local to the class and cannot share data and logic.

On the other hand if we use Dependency Injection (DI), the angular injector provides a Singleton i.e a single instance of the service so the data and logic can be shared very easily across all the components.

With Dependency Injection it is very easy to mock objects when unit testing. This is one of the greatest benefits of DI.

Advantages of Dependency Injection in Angular?

Angular is an open-source front-end development platform developed by Google that makes it easy to build Mobile and Desktop web applications. Angular now comes with the latest features such as templates, dependency injection, Forms, Pipes, HTTP Service, component, Directives, etc. which are basically needed to build a complex and sophisticated application that lives on the web, mobile, or the desktop.
7-Feb-2022 /35 /574

In this article, I am going to give a brief introduction to Angular Framework. At the end of this article, you will understand the following pointers in detail.
7-Feb-2022 /35 /574

In this article, I am going to discuss Angular Versions and Versioning in detail. Please read our previous article where we gave a brief introduction to the angular framework. At the end of this article, you will understand the different angular versions and in each version what are the new features introduced as well as what improves. Till now Google has released 7 versions of angular, they are as follows:
7-Feb-2022 /35 /574
﻿