Windows Communication Foundation (WCF) is a platform or a framework for creating and distributing connected applications. Built on top of the 2.0 .NET Framework CLR, the WCF is a set of classes that allows developers to build service-oriented applications.

WCF has a layered architecture that offers ample support for developing various distributed applications. The architecture is explained below in detail. 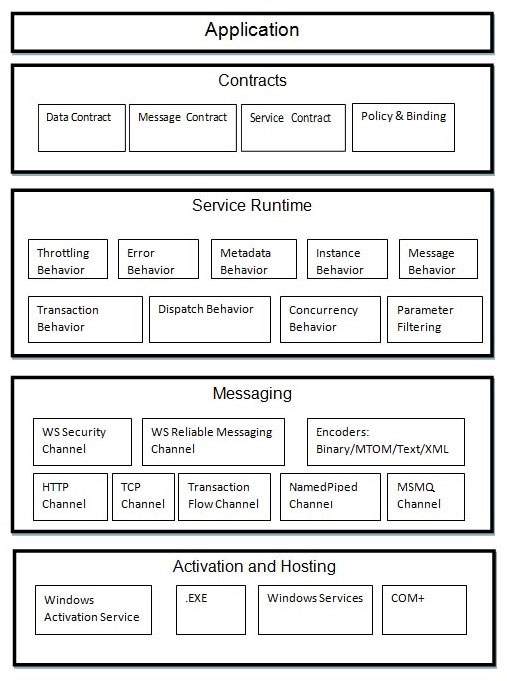 The contracts layer is just next to the application layer and contains information similar to that of a real-world contract that specifies the operation of a service and the kind of accessible information it will make. Contracts are basically of four types discussed below in brief −

This layer, composed of several channels, mainly deals with the message content to be communicated between two endpoints. A set of channels form a channel stack and the two major types of channels that comprise the channel stack are the following ones −

The last layer of WCF architecture is the place where services are actually hosted or can be executed for easy access by the client. This is done by various mechanisms discussed below in brief.

WCF stands for Windows Communication Foundation. It is basically used to create a distributed and interoperable Application. WCF Applications came into the picture in .Net 3.0 Framework. This is a framework, which is used for creating Service oriented Applications. You can send the data asynchronously from one end point to another. I think you all know about Web Service and are thinking, if we already have Web Services and accessing on a remote basis then why did WCF come into picture?
22-Apr-2022 /50 /741

Major differences that exist between WCF and a Web service.

WCF (Windows Communication Foundation): WCF, as the name suggests, is a unified .NET framework that is used to develop service-oriented applications. It allows you to develop applications that can communicate using different communication mechanisms.
22-Apr-2022 /50 /741

Difference between WCF and Web API.

WCF is used to create a distributed and interoperable Applications. It provides a framework which is used for building service-oriented-connected applications for the transmission of the data as an asynchronous, from one service-point to other service-point. Previously known as Indigo and is a framework for building, configuring, and deploying network-distributed services.
22-Apr-2022 /50 /741
﻿