Boosting is an ensemble modeling technique that attempts to build a strong classifier from the number of weak classifiers. It is done by building a model by using weak models in series. Firstly, a model is built from the training data. Then the second model is built which tries to correct the errors present in the first model. This procedure is continued and models are added until either the complete training data set is predicted correctly or the maximum number of models are added.

AdaBoost was the first really successful boosting algorithm developed for the purpose of binary classification. AdaBoost is short for Adaptive Boosting and is a very popular boosting technique that combines multiple “weak classifiers” into a single “strong classifier”. It was formulated by Yoav Freund and Robert Schapire. They also won the 2003 Gödel Prize for their work. 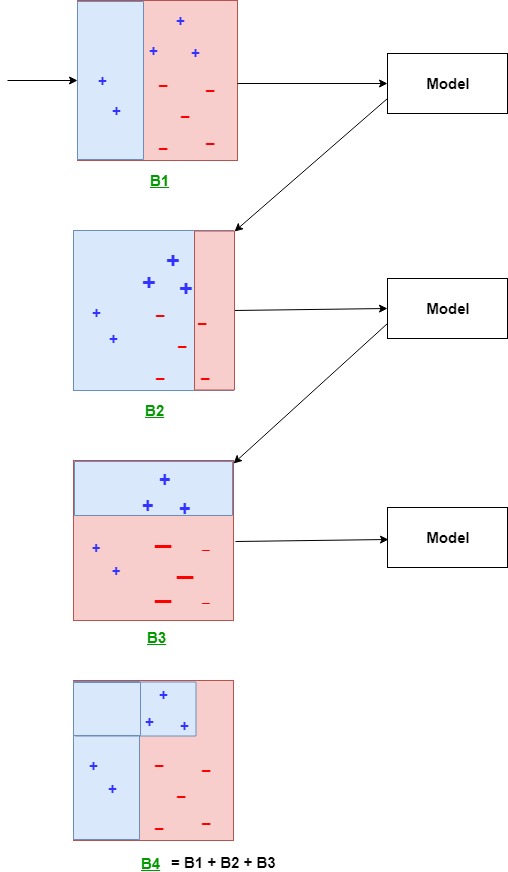 Explanation:
The above diagram explains the AdaBoost algorithm in a very simple way. Lets try to understand it in a stepwise process:

Learning means the acquisition of knowledge or skills through study or experience. Based on this, we can define machine learning (ML) as follows: It may be defined as the field of computer science, more specifically an application of artificial intelligence, which provides computer systems the ability to learn with data and improve from experience without being explicitly programmed. Basically, the main focus of machine learning is to allow the computers learn automatically without human intervention. Machine learning is a subfield of artificial intelligence, which is broadly defined as the capability of a machine to imitate intelligent human behavior. Artificial intelligence systems are used to perform complex tasks in a way that is similar to how humans solve problems.
27-jan-2021 /10 /134

Sequence Modeling is the task of predicting what word/letter comes next. Unlike the FNN and CNN, in sequence modeling, the current output is dependent on the previous input and the length of the input is not fixed. In this section, we will discuss some of the practical applications of sequence modeling.
3-jan-2022 /10 /134

DESCRIPTIVE STATISTICS : Descriptive Statistics is a statistics or a measure that describes the data. INFERENTIAL STATISTICS : Using a random sample of data taken from a population to describe and make inferences about the population is called Inferential Statistics.
3-jan-2022 /10 /134
﻿