What are the different things required to write a LINQ Query?

In order to write a LINQ query, we need the following three things

What is a Query?

A query is nothing but a set of instructions which is applied on a data source (i.e. in-memory objects, SQL, XML, etc.) to perform certain operations (i.e. CRUD operations) and then tells the shape of the output from that query. That means the query is not responsible for what will be the output rather it is responsible for the shape of the output. Means what is going to return from that query whether it is going to return a particular value, or a particular list or an object.

Each query is a combination of three things. They are as follows:

What are the different ways to write a LINQ query?

We can write the LINQ query in three different ways. They are as follows

Note: From the performance point of view there is no difference between the above three approaches. So, which you need to use, it totally depends on your personal preference. But the point that you need to keep in mind is, behind the scene, the LINQ queries written using query syntax are translated into their lambda expressions before they are compiled.

This is one of the easy ways to write complex LINQ queries in an easy and watchable format. The syntax for this type of query is very much similar to SQL Query. If you are familiar with SQL queries then it is going to be easy for you to write LINQ queries using this query syntax. The syntax is given below.

Method syntax becomes most popular now a day to write LINQ queries. It uses a lambda expression to define the condition for the query. Method syntaxes are easy to write simple queries to perform watch-write operations on a particular data source. But for complex queries Method syntaxes are a little hard to write as compared to query syntax.

In this approach, the LINQ query is written by using multiple methods by combining them with a dot (.). The Syntax is given below:

This is the combination of both Query and Method syntax. The syntax is given below.

Let us understand how to use Query Syntax, Method Syntax, and Mixed Syntax with examples.

Example: We have an integer list and we need to write a LINQ query which will return all the integers which are greater than 5. We are going to create a console application.

Now run the application and it will display the values 6 7 8 9 10 as expected in the console window. Let us understand what we did in the above code. 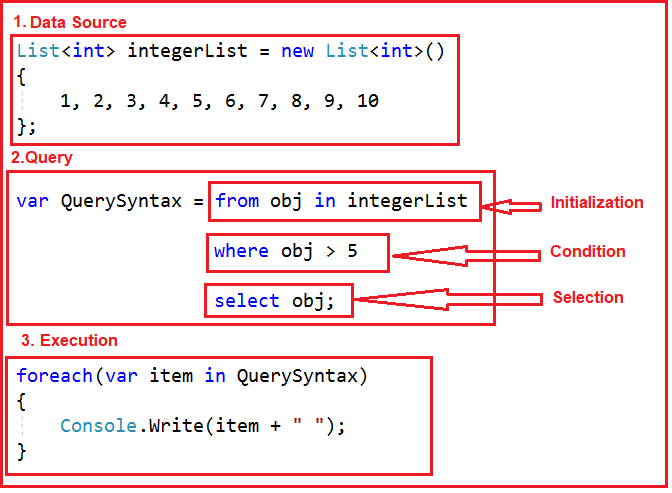 Now run the application and you will get the output as expected. Let us have a look at the following diagram to understand Method Syntax. 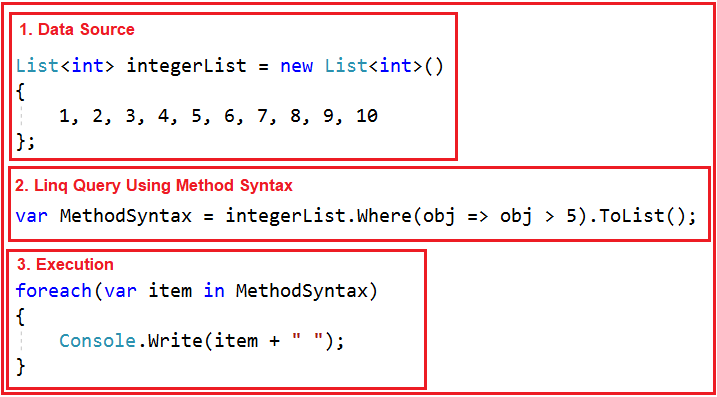 Let us change our requirements. First, we need to filter the list where the value is greater than 5 and then we need to calculate the sum.

Now run the application and you will see the output as expected. Let us understand what we did in the above code by looking at the following image. 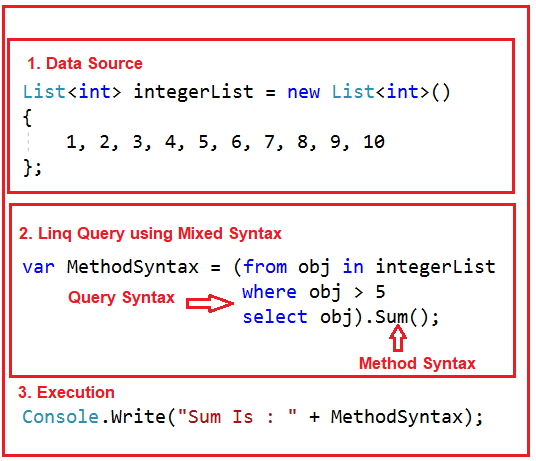 What is Microsoft .Net 6 LINQ?

LINQ stands for Language-Integrated Query and it is a powerful query language that was introduced with .Net 3.5 & Visual Studio 2008. You can use LINQ with C# or VB to query different types of data sources such as SQL, XML, In memory objects, etc.
14-Feb-2022 /38 /453

What is Architecture of LINQ?

In this article, I am going to discuss the Architecture of LINQ. The term LINQ stands for Language Integrated Query and it is pronounced as LINK. Nowadays the use of use LINQ increasing rapidly. So, as a developer, you should understand the Linq and its architecture. At the end of this article, you will have a very good understanding of the following pointers.
14-Feb-2022 /38 /453

How to write Different Ways to Write LINQ Query?